What is Egg Donation?

In Vitro Fertilization with donated eggs, or Egg Donation, involves obtaining and fertilizing donor eggs outside of the body of the female who is to receive them by means of a simple intervention. The eggs will be fertilized with sperm from either the recipient’s partner or from a Sperm Bank. Once fertilization is complete, a limited number of the embryos that have been obtained will be transferred into the recipient’s uterine cavity so that they can continue to develop naturally there.

Egg Donation allows women with limited options to fulfil their dreams of motherhood. Egg Donation is a charitable act, meaning that the recipient cannot offer money to the donor nor choose who the donor will be. Likewise, the donor will not receive any payment for her donation. For legal reasons, the donor’s anonymity will be maintained under all circumstances.

When is Egg Donation Recommended?

PHASE I: SELECTION AND ASSIGNMENT OF THE DONOR

The Reproduction Unit’s medical team is always responsible for choosing which donor eggs will be used in each case. The medical team guarantees the highest phenotypic and immunological similarities, as well as the greatest possibilities of compatibility between the donor and the recipient and her family environment. Donors are always between eighteen and thirty-five years of age, have the full capacity to work and are in good psychophysical health. In order to assure the donor’s health, the medical team will carry out a thorough gynaecological exam as well as a comprehensive test for genetic markers.

The recipient’s uterus will be prepared to receive the eggs with hormone replacement therapy. This therapy will be monitored with ultrasounds and hormone testing.

PHASE III: FOLLICULAR ASPIRATION OF THE DONOR AND EMBRYO CULTURE

Once the doctor has made sure that the donor’s follicles have reached an appropriate size and quantity, we will schedule a procedure called follicular aspiration in order to retrieve eggs from the donor’s ovaries. The procedure is ultrasound guided and is performed in the Operating Room under sedation. 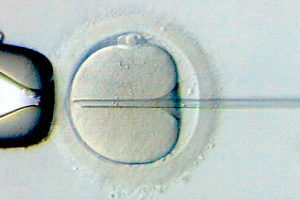 The semen are prepared in the Lab with the objective of selecting the most appropriate sperm for fertilization, whether the semen be from the recipient’s partner or spouse, or from a Sperm Bank. Insemination with the eggs can be carried out either by Conventional In Vitro Fertilization, or by Intracytoplasmic Sperm Injection (ICSI). The latter involves introducing a pre-selected sperm directly into the cytoplasm of a mature egg.

On day following follicular aspiration we can determine the number of eggs that have been fertilized, or pre-embryos. The embryos are cultured for three to five days either in conventional incubators with controlled CO2 and temperature levels, or in a Time-Lapse EmbryoscopeTM incubator. Throughout every step of the process the patient will be in direct contact with the lab personnel in charge of her case in order to stay informed about the evolution of the process.

The embryo transfer consists of the introduction of the embryos into the uterine cavity by passing through the vagina. This is a painless, outpatient procedure that does not require sedation or hospitalization. It is carried out in the Operating Room and lasts about 10 minutes. The recipient will continue taking a hormone therapy to encourage a viable pregnancy.

If any more good quality, viable embryos are left remaining after the treatment is finished, they will be cryopreserved by means of vitrification (flash-freezing). This technique will allow us to transfer the cryopreserved embryos during a later cycle.

A pregnancy test will be performed on the recipient 16 days after the donor has undergone follicular aspiration.